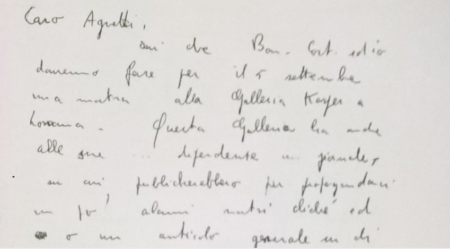 This talk presents a focus on the precious work that the artists’ archives and foundations perform within the art world: a theme with a strong scientific and informative value, which has always been fundamental for collectors, researchers and students, for operators in the cultural fields, galleries and museums and also for the archives and foundations themselves, a theme that is hardly possible to deepen through a comparison. BUILDING would like to offer the possibility of listening directly to some of these protagonists, creating a unique opportunity to shed light on how institutions dealing with the protection and promotion of artists’ work today.

Germana Agnetti, Vincenzo Agnetti Archive Daughter of Vincenzo Agnetti and Bruna Soletti, Germana Agnetti is a psychiatrist and founder of the Archive Vincenzo Agnetti, an association established upon initiative of the family. The Archive is based in Milan in Via Machiavelli 30, in the artist’s studio, full of memory and creative charm, a place of exhibition, ideas, proposals, initiatives and research, which wants to develop on the same perspective and  intuition that Agnetti used to have. Founding partners are Germana Agnetti and nephew Guido Barbato, respectively president and secretary. The Archive uses a scientific committee composed of Bruno Corà, Marco Meneguzzo and Giorgio Verzotti.

Bettina Della Casa, Giulio and Anna Paolini Foundation Author of catalogues and writer in specialized magazines on contemporary art, curator from 1999 to 2018 at the MASI in Lugano (ex Museo Cantonale d’Arte), today Bettina Della Casa is director of the Giulio and Anna Paolini Foundation in Turin. The Foundation aims to encourage studies, archiving, exhibitions, mediation and any other initiative aimed at promoting the artistic work of Giulio Paolini.

Giovanni Iovane, Director of the Academy of Fine Arts of Brera Giovanni Iovane is an art critic and professor of contemporary art history at the Academy of Fine Arts of Brera, of which he has been director since November 2018. Among his recent exhibitions are Tiziano / Gerhard Richter, Palazzo Te, Mantova ( 2018), Second Solution of Timelessness, BUILDING, Milan (2018), curated in collaboration with the art historian and critic Helmut Friedel and Solo – Vincenzo Agnetti, Museo Novecento, Florence (2019).