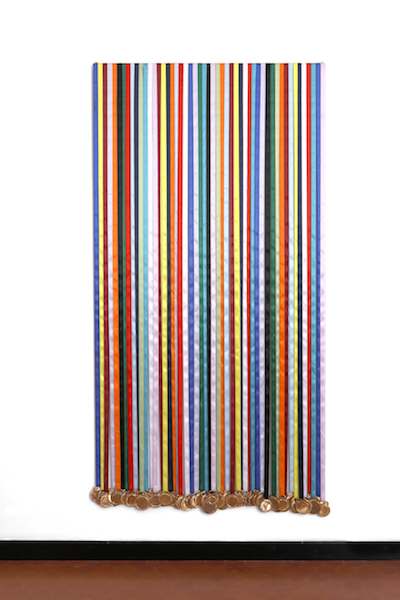 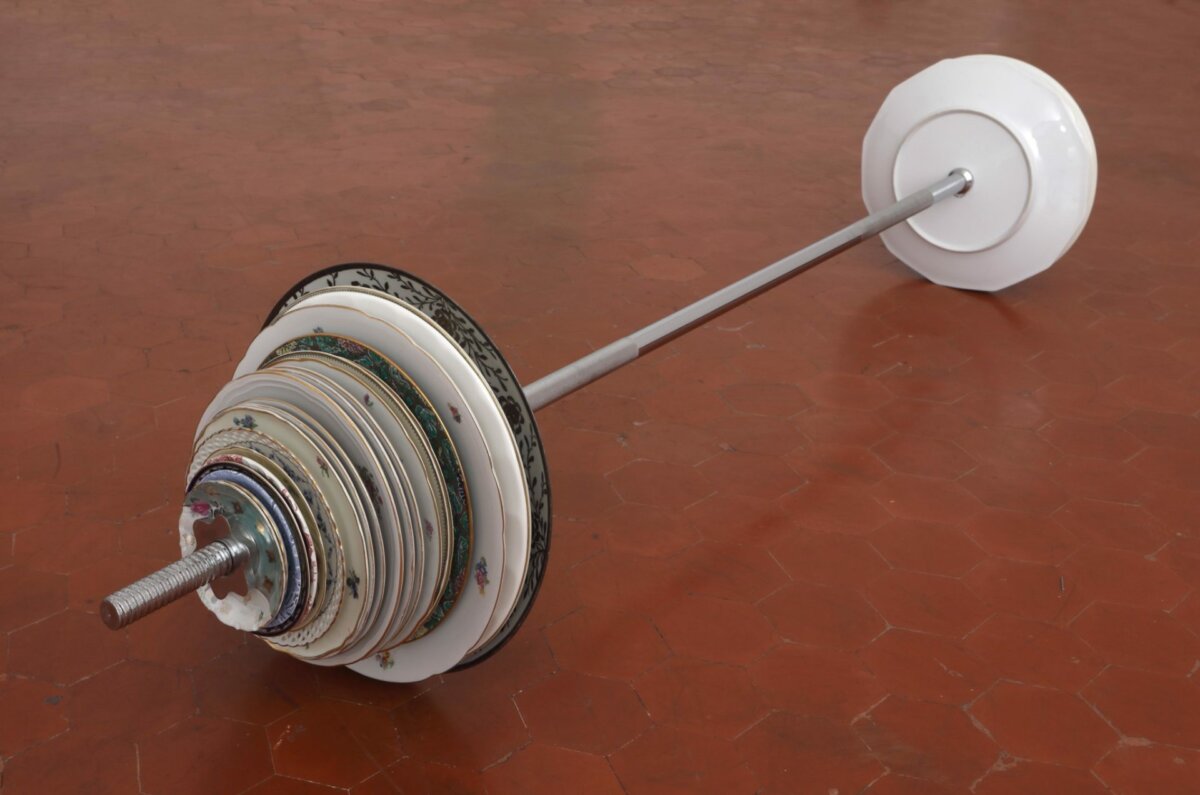 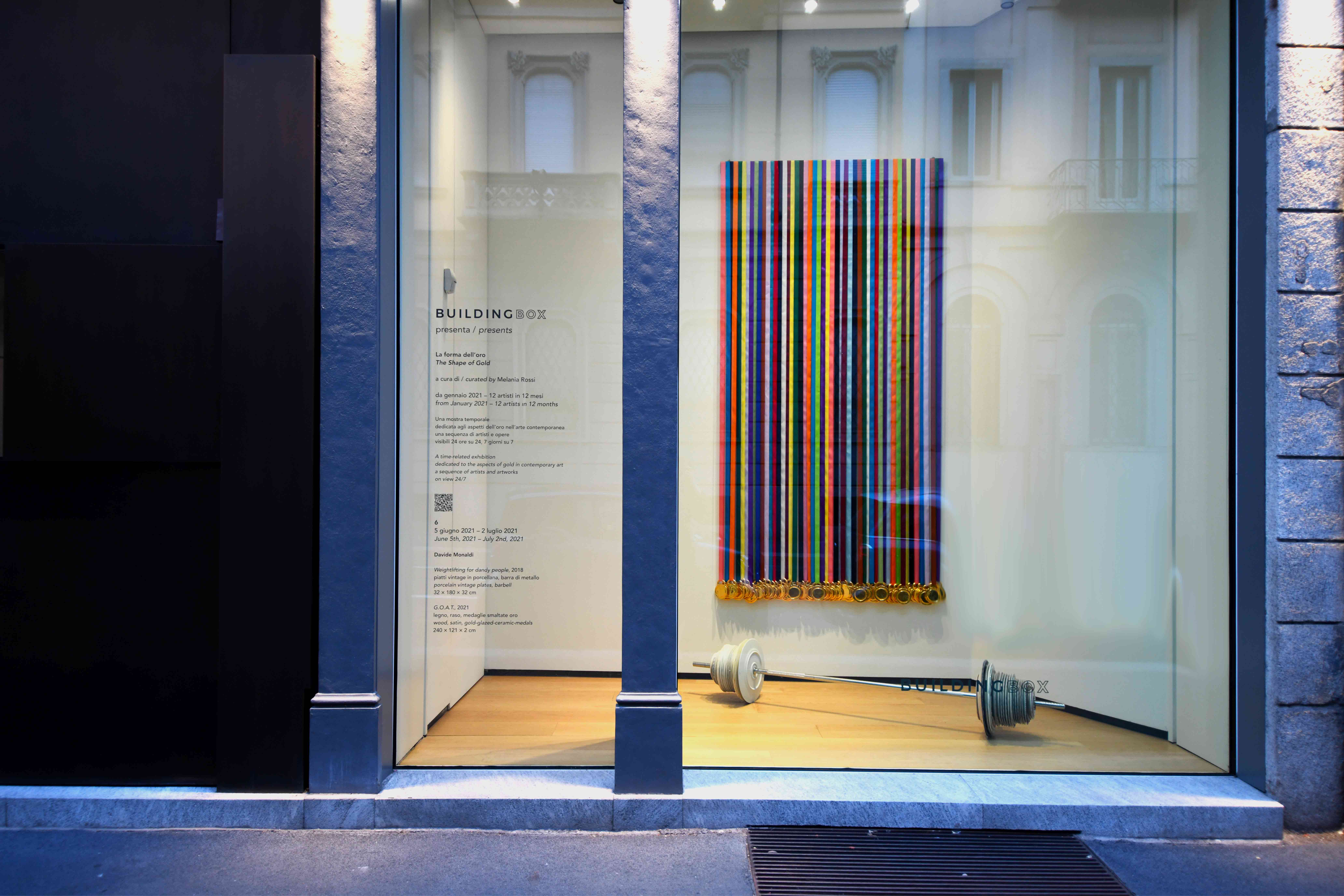 BUILDINGBOX presents, from June 5th, 2021 to July 2th, 2021, two works by Davide Monaldi (San Benedetto del Tronto, 1983), sixth artist of The Shape of Gold, the annual exhibition project curated by Melania Rossi, which investigates the use of gold in contemporary artistic research through the works of twelve artistsinvited to compete with the chosen theme. The installations are visible 24 hours a day, 7 days a week from the window in via Monte di Pietà 23 in Milan.

The piece titled G.O.A.T., from the accolade Greatest of All Times, consists of a cascade of fake gold medals hanging from long, colorful satin ribbons, while Weightlifting for dandy people is a barbell that holds gilt-edged porcelain plates.

In Monaldi’s vision, the worlds of sport and contemporary art present similar dynamics, linked to competition, spectacle, challenge and performance. He often explores these themes in his installations, which become ironic, dramatic reflections on his identity as an artist. In art as well as sport, both luck and talent play a crucial part, and any forecasts for success or failure can turn out quite differently.

The “serious game” of Monaldi’s art consists in faithfully reproducing everyday objects in glazed ceramic or terracotta, giving rise to a curious parallel world where apparently insignificant things, removed from their usual context and elevated to the realm of sculpture, suddenly become interesting and acquire new, unsettling meanings. These are ready-mades in appearance only, because his technique draws on the Italian tradition of craftsmanship, and his own personal vision. Davide Monaldi’s works are a long time in the making but come across as fresh, free and conceptual, tackling both autobiographical elements and social issues with a light touch that holds a darker side too.

Monaldi’s ceramics use golden lustre above all as a narrative device; more specifically, in G.O.A.T. the artist frames gold as part of a system of values linked to the fleeting concept of “best”, and in Weightlifting for dandy people he explores the quirkiness of an image based on two opposites of style and aesthetics.

In the light of the farcical ways we celebrate success, the artist has transformed everyday items into objects worthy of reverence, highlighting the paradoxical nature of modern society. 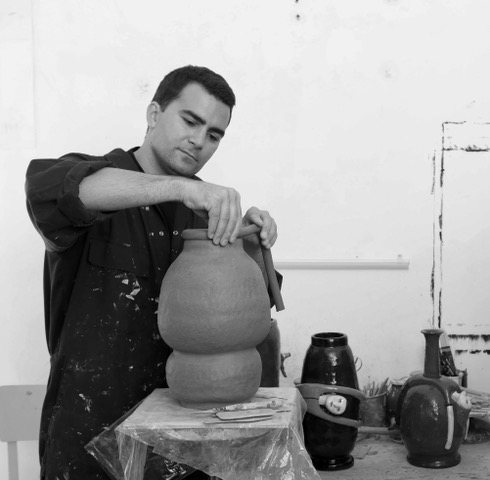 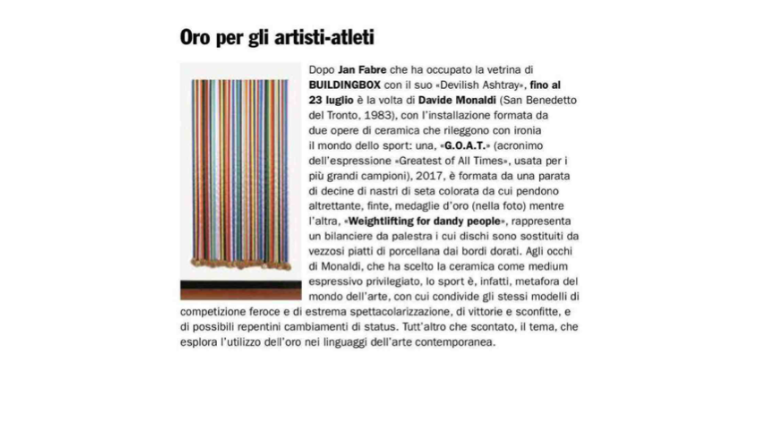