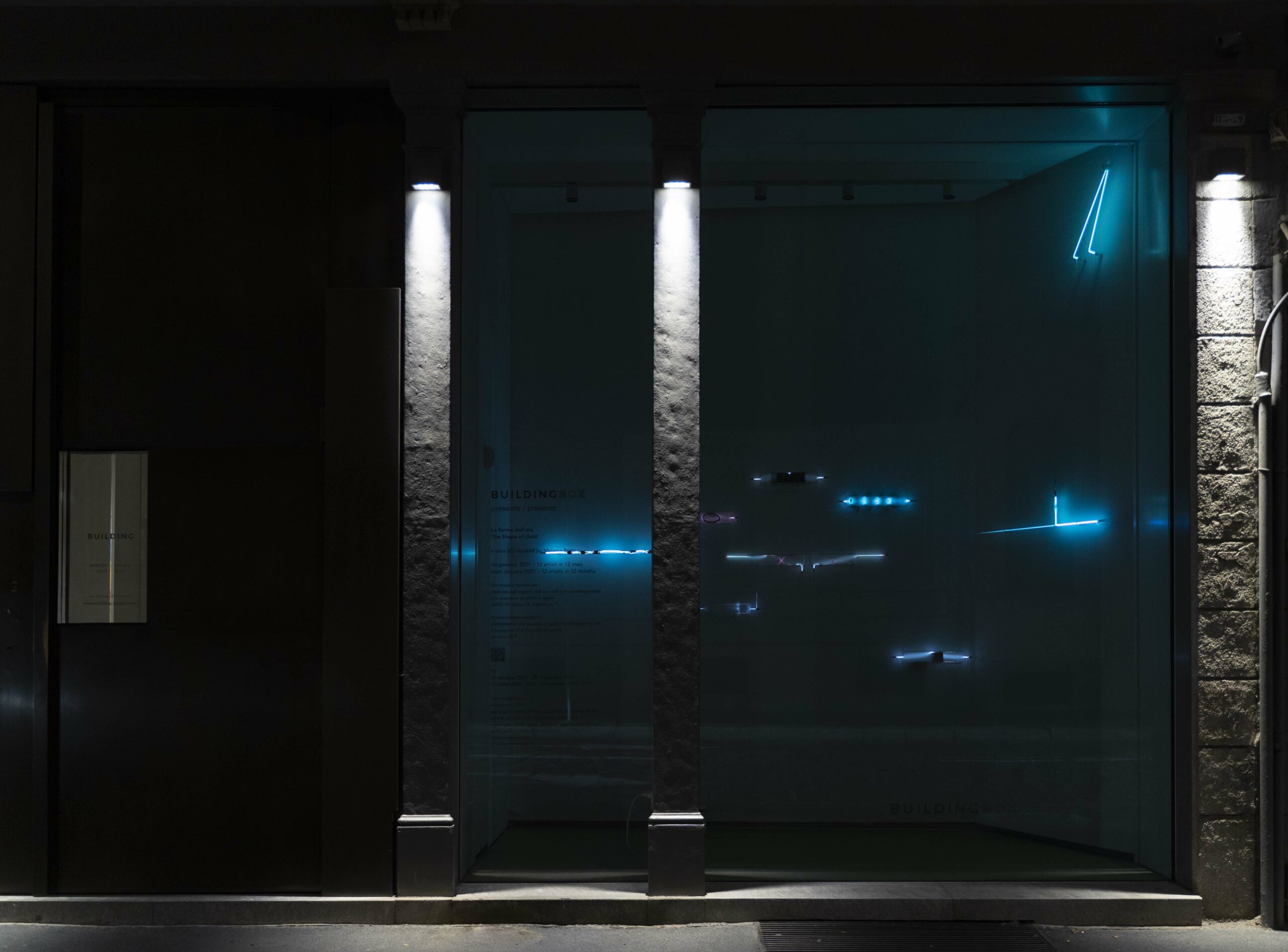 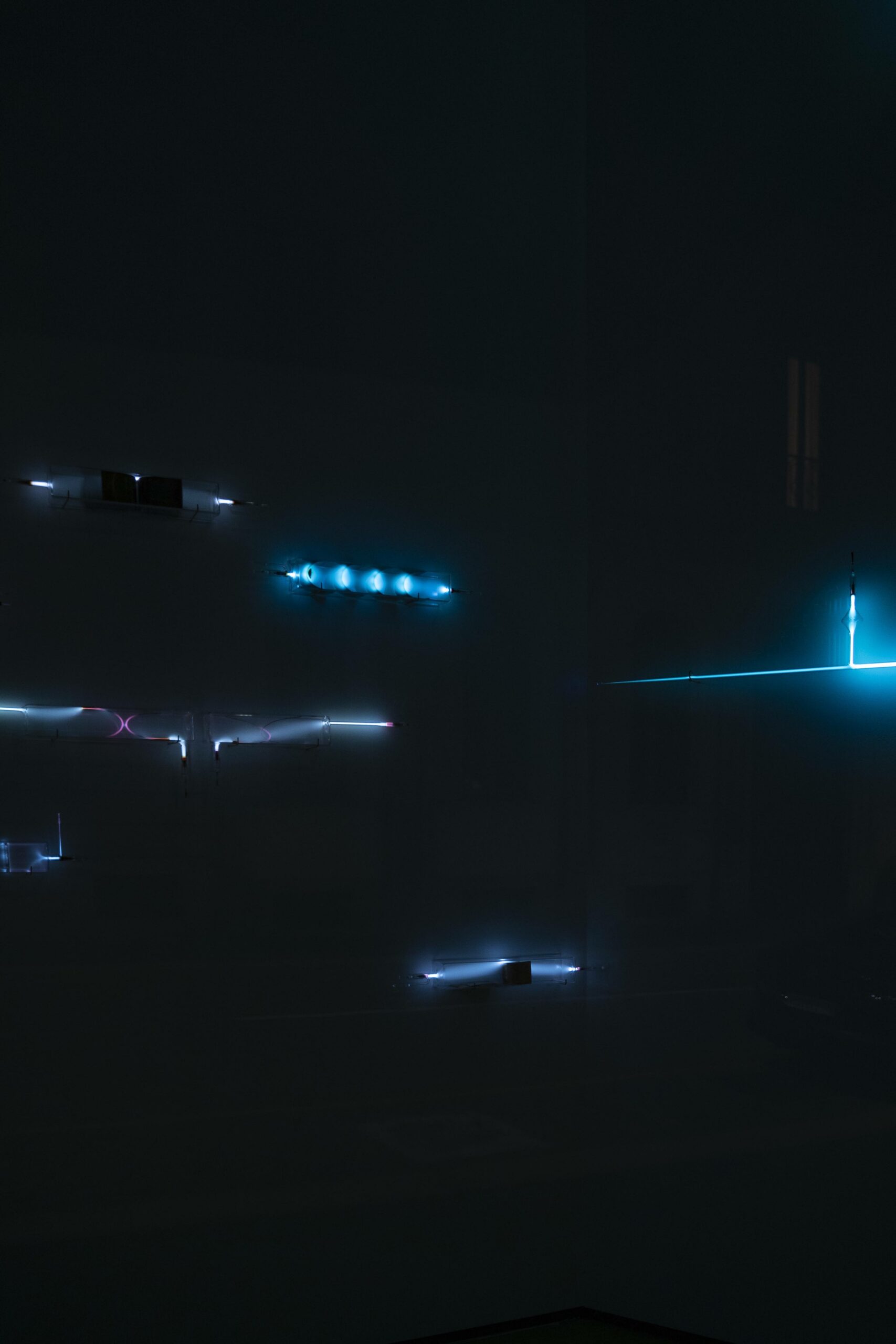 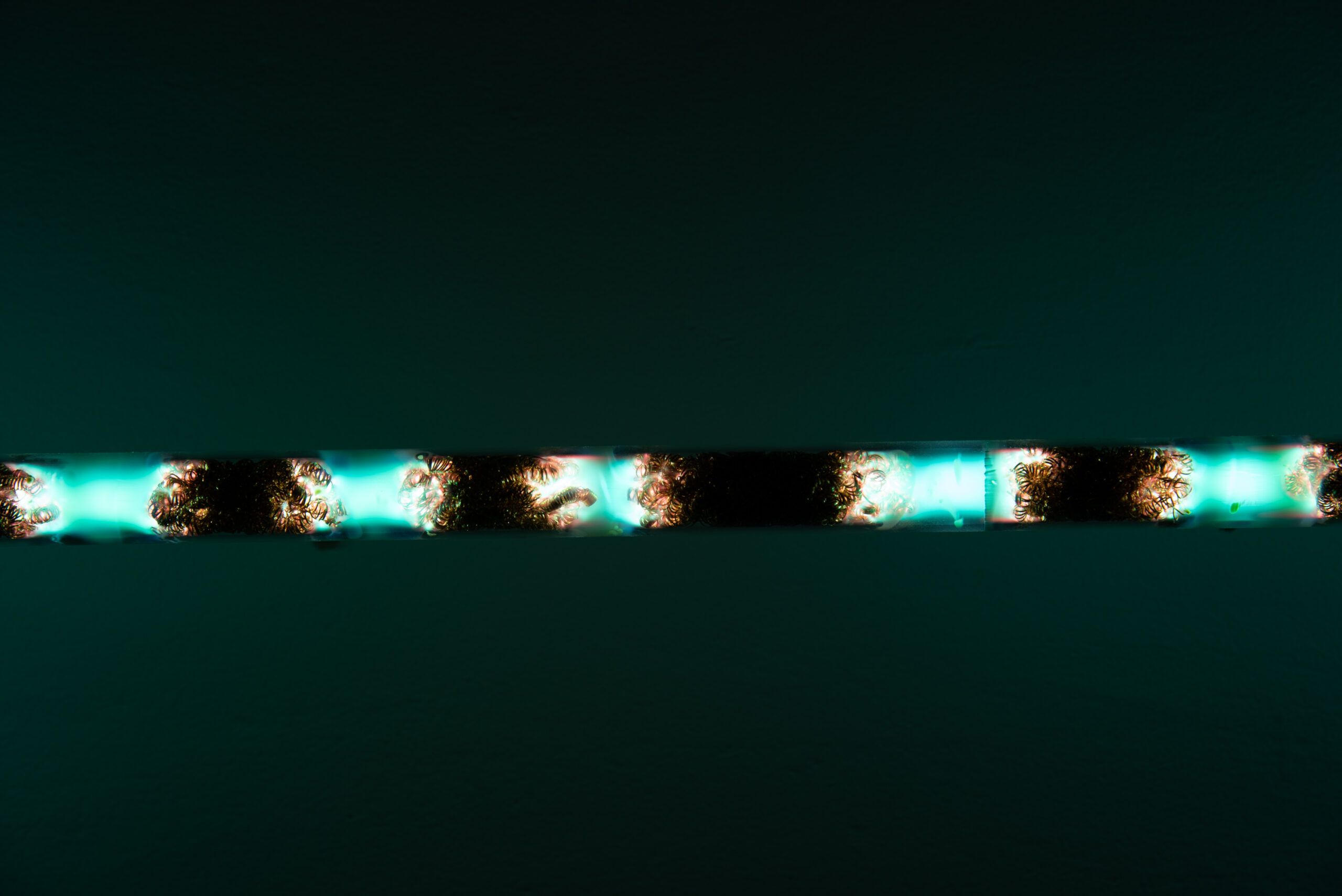 BUILDINGBOX presents, from October 30th, 2021 to November 29th, 2021, a site-specific installation by José Angelino (Ragusa, 1977), the eleventh artist of The Shape of Gold, the annual exhibition project curated by Melania Rossi, which investigates the use of gold in contemporary artistic research through the works of twelve artists invited to compete with the chosen theme. The installations are visible 24 hours a day, 7 days a week from the window in via Monte di Pietà 23 in Milan.

The installation Resistenze [Resistances] transforms BUILDINGBOX into a place for observation and reflection on the complex phenomena of nature. Light, air, sound, vibration, matter, emptiness, electricity and magnetic fields are the elements that the artist uses to create his works. Drawing on his training as a physicist, Angelino translates the “regulated disorder” of nature into sculptural form. Recent scientific research, such as that by Professor Giorgio Parisi, that earned him a Nobel Prize this year, confirms that so-called “disordered systems”, that is, those formed by many individuals who interact with one another in a non-uniform, interdisciplinary manner, are among the most common systems. They exist in various fields, from physics to neurobiology, from evolutionary theories to economics and social sciences.

In his visual art Angelino investigates the complex relationships between the elementary components of nature, searching for rules in disorder and vice versa. His works raise questions and invite us to observe reality with all our senses active, to capture connections, resonances and small variations in natural flows. The installation Resistenze [Resistances] is a sort of obstacle course, in which the flow of light – created by argon gas and electricity inside minimal glass shapes – is interrupted and deviated to create new forms, some predictable, some totally unexpected.

The artist draws with light, thus manifesting the space between order and disorder, where life develops. Contemporary science has discovered that only complex systems, on the brink of chaos, possess the adaptability and flexibility that is necessary for the preservation of life. The Chaos Theory explains that the world does not follow a precise, predictable model. Many phenomena, not only physical, but also social, economic and philosophical, obey this powerful, dominant paradigm, including in the field of cosmology and the study of the earth.

The elliptical shape of Resistenze references the map of Background Radiation, which is the residual radiation generated by the initial stages of the birth of the universe, in line with the Big Bang model. Gold is present in various forms within the work: the artist uses it as a solid element that produces interference in the flow of light, evoking the mysterious, random forces of chaos which generated the cosmos. 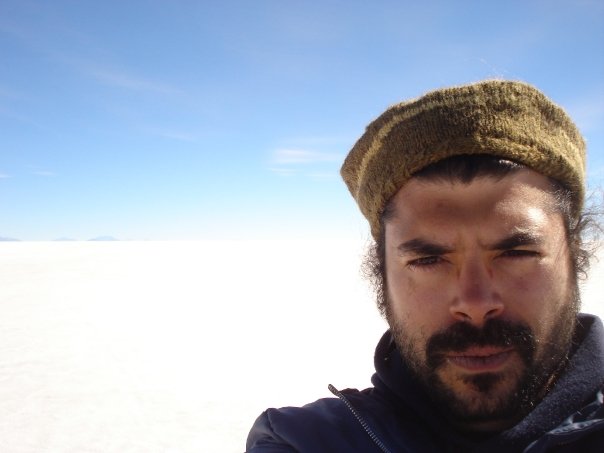 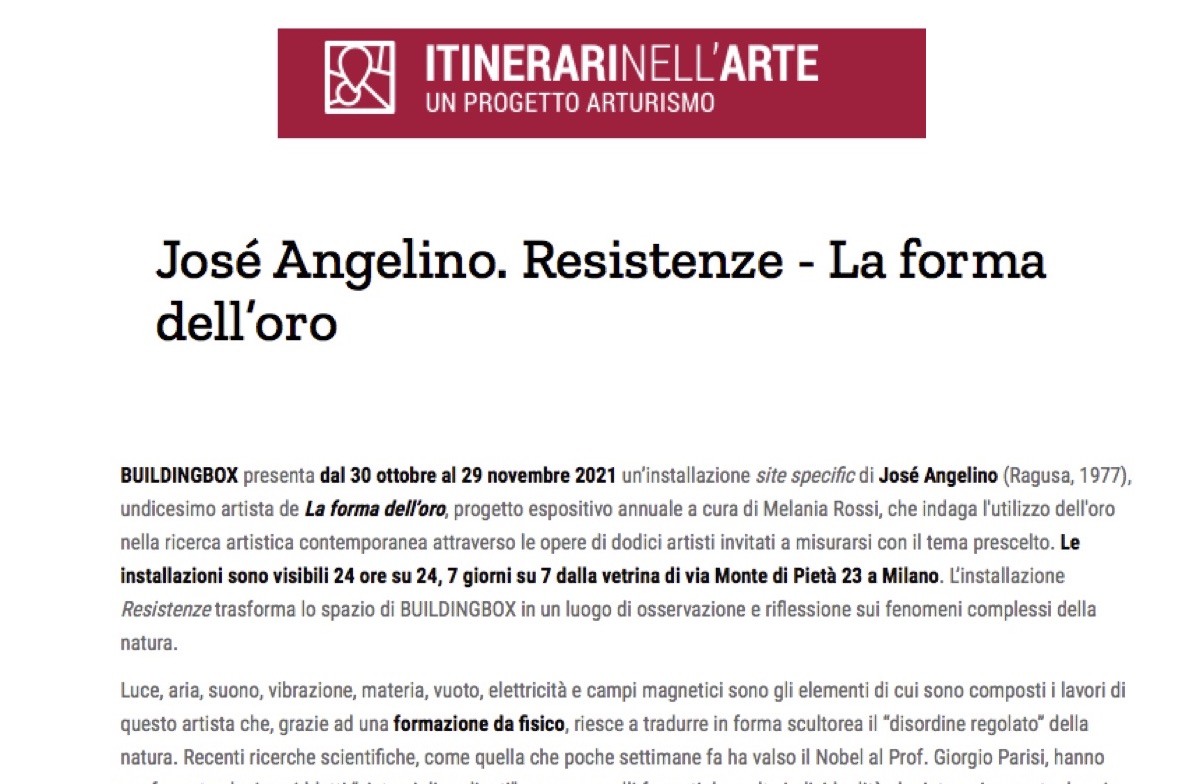 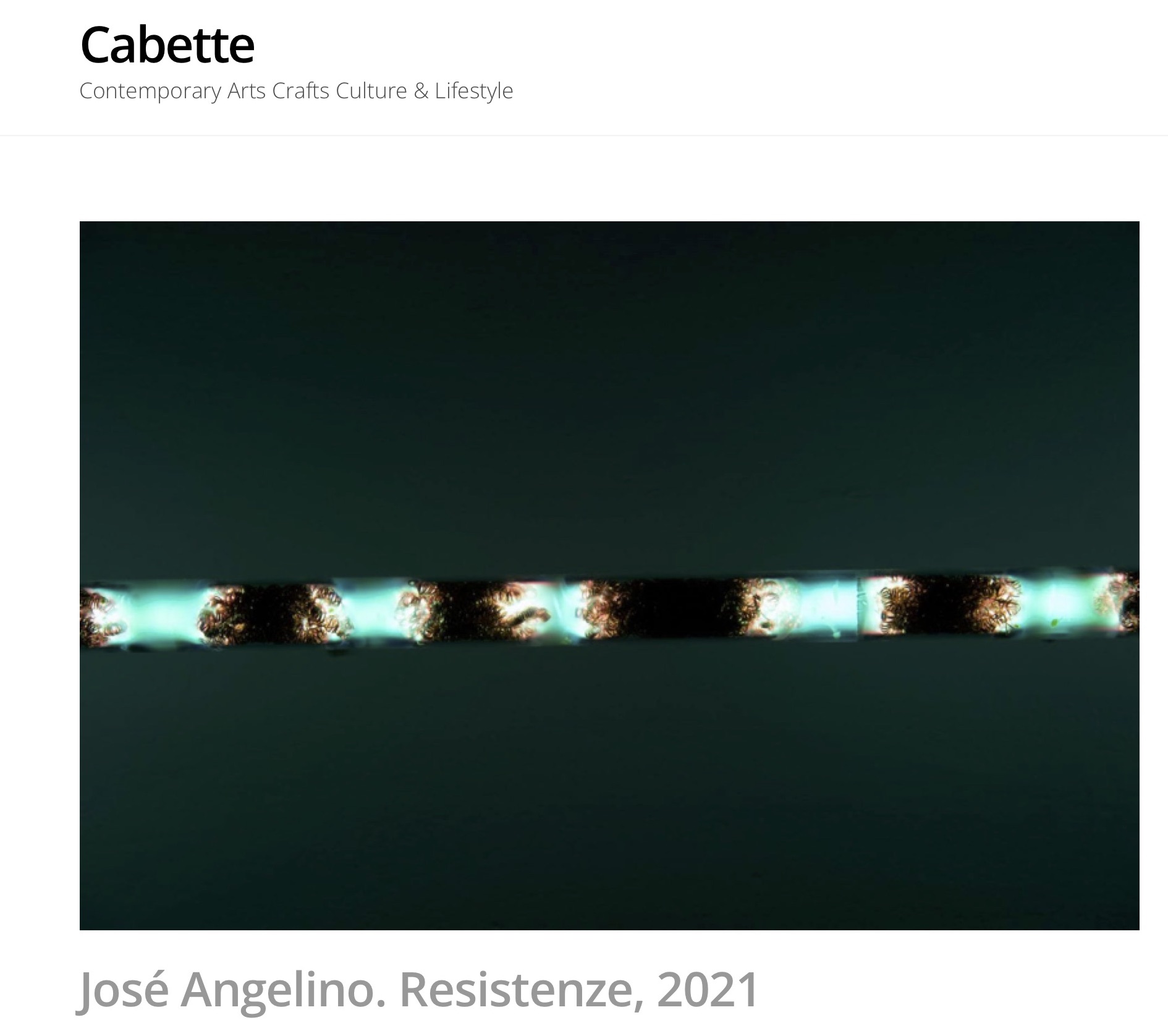