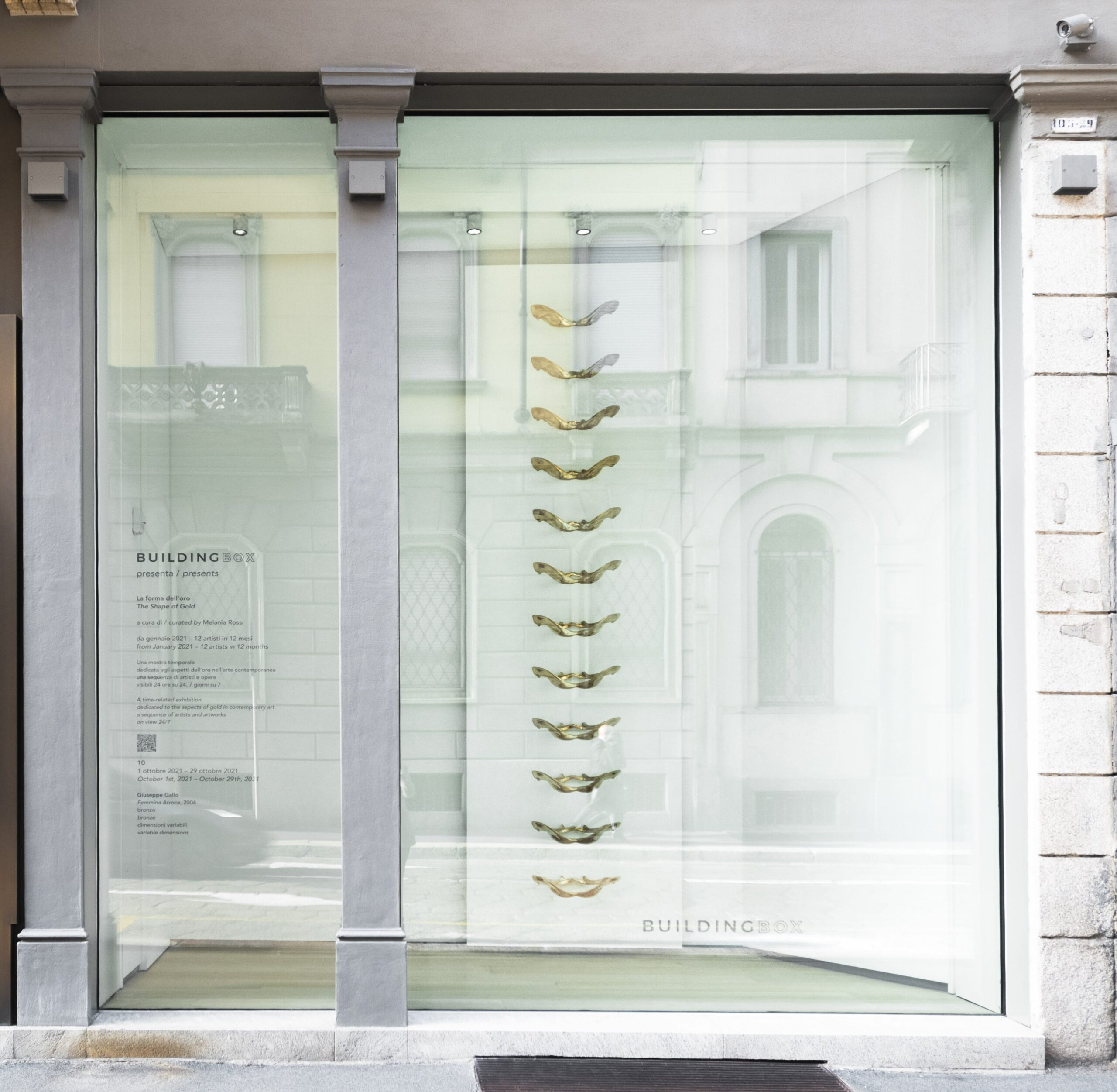 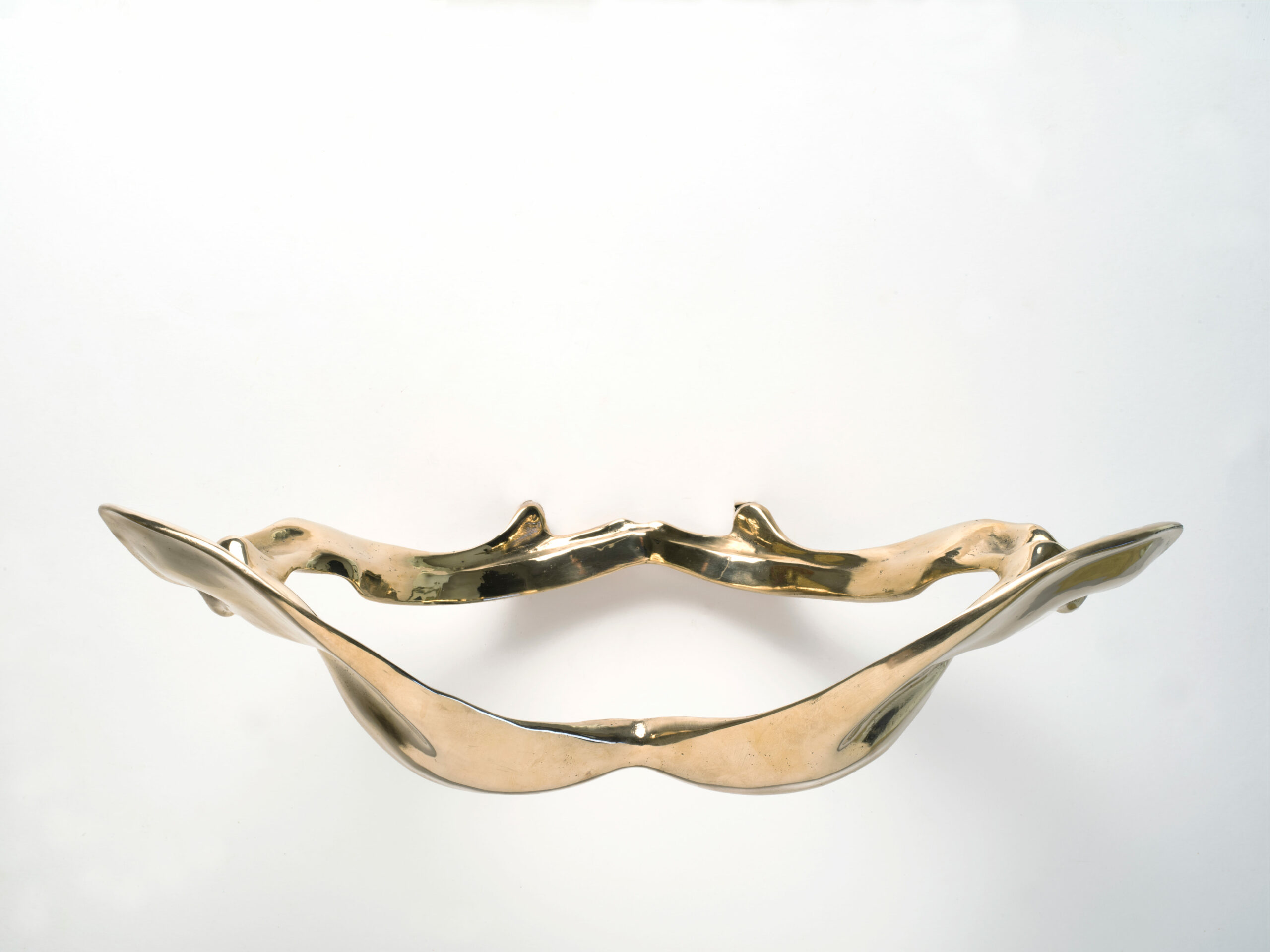 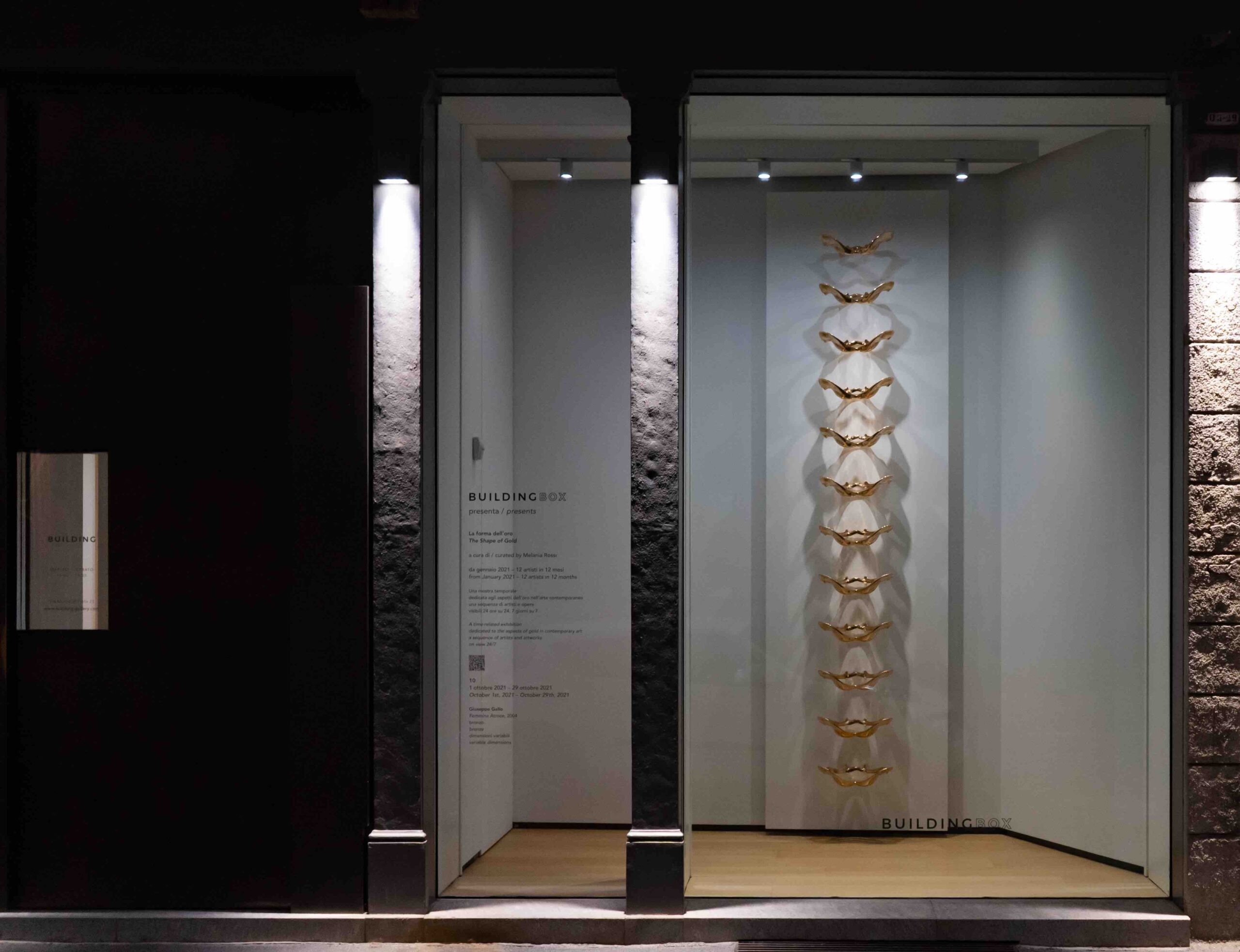 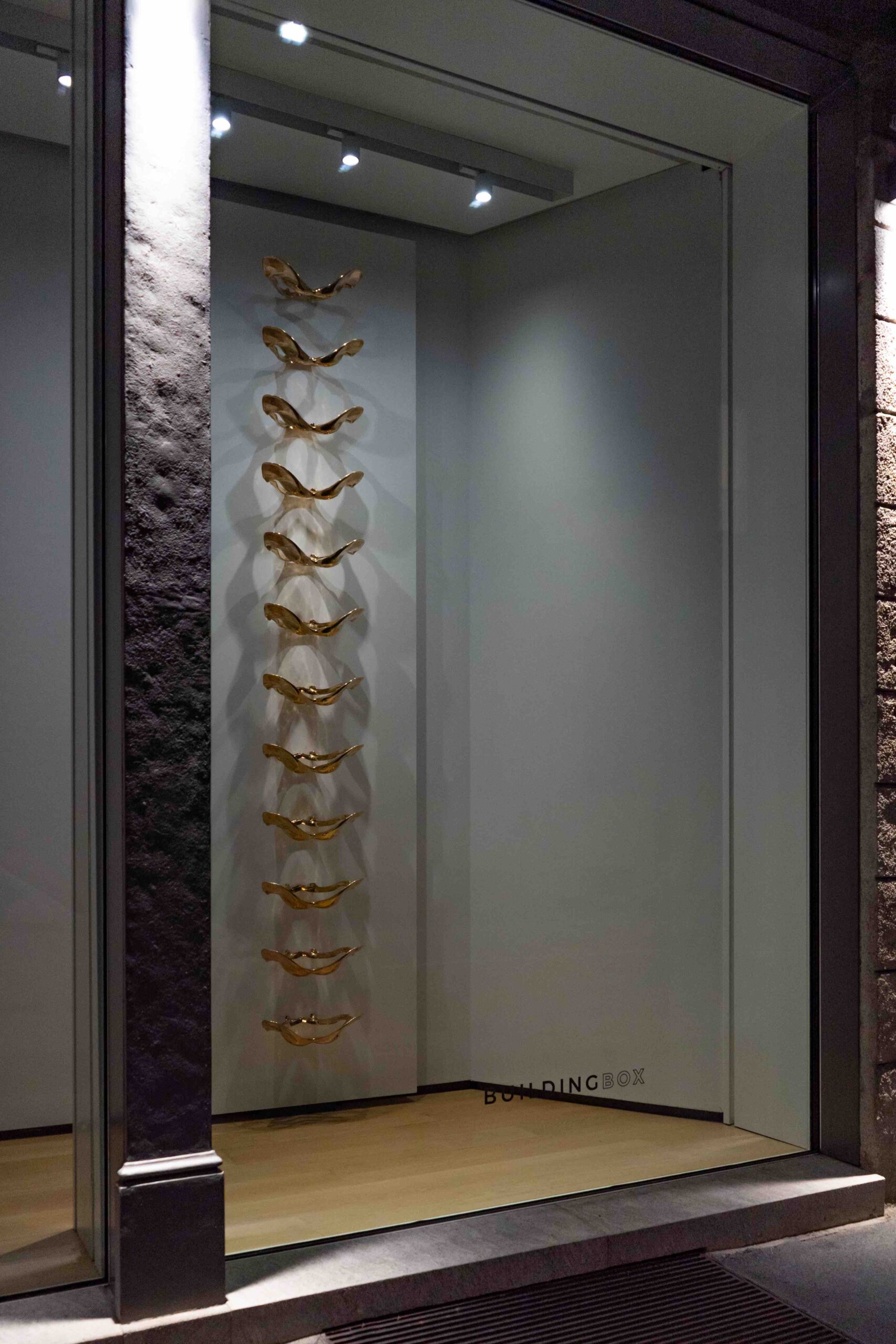 BUILDINGBOX presents, from October 1st, 2021 to October 29th, 2021, a work by Giuseppe Gallo (Rogliano, Cosenza, 1954), the tenth artist of
The Shape of Gold, the annual exhibition project curated by Melania Rossi, which investigates the use of gold in contemporary artistic research through the works of twelve artists that have been invited to compete with the chosen theme. The installations are visible 24 hours a day, 7 days a week from the window in via Monte di Pietà 23 in Milan.

Femmina Atroce [Atrocious Female] is a sculpture comprising twelve elements in gold-tone bronze. The sinuous, organic shapes that make up the artwork have something feminine about them, resembling a female pelvis multiplied vertically. The artist confirms this first impression in the title, but the adjective chosen hints at a conceptual element, or rather a hidden paradox. The sculptures are indeed casts of bones but the bones in question are those of a shark’s jaw, minus the teeth. With the rapid-fireirony that characterizes his practice, Gallo captures the associations between animal and human forms without judgment, as nature itself is.

Thus things we take to be extremely aggressive can also be unexpectedly graceful and refined, and, vice versa, there are things we consider harmless, which when seen in a different light become threatening and terrifying. As in the case of the shark’s jaw that looks elegant and sophisticated, contrast is what most interests the artist. Gallo represents the duel/dance between life and death, which fuels all of our innermost urges, in images that combine both ferocious and sensual traits. The Great Mother, who terrorizes and protects, gives birth and devours, possesses both masculine and feminine traits, the Yin and the Yang. It is the combination of these opposites that creates harmony, generating beauty.

Gallo loves the natural world and tries to spend as much time in contact with it as possible. Nature is his primary source of inspiration, filtered by a vision that embraces the surreal and detaches from earthly things, in which things are both what they seem and not what they seem. The metamorphic ability of art is at the core of his work, which draws on forms and raw materials to reveal paradoxes and seduce the vision until it becomes thought. The artist creates new images by breaking down, transforming and combining existing shapes; by moving away from naturalism he shows the hidden connections among natural things. The vertebral structure of Femmina Atroce [Atrocious Female] resembles a totem and is thus imbued with symbolic power. It has a supporting function and an upward thrust, a force that pushes from inside to out, from the bottom up. The gleaming, reflective bronze surface accentuates the sensuality of the curved shapes, and the gold color endows the piece with the potency of a simulacrum. There is no deceit in Gallo’s art, but rather a life-affirming quest for continuous discovery. There is no provocation, rather an erotic charge that combats a castrating morality, in an attempt to arrive at a form of knowledge which includes both culture and instinct. 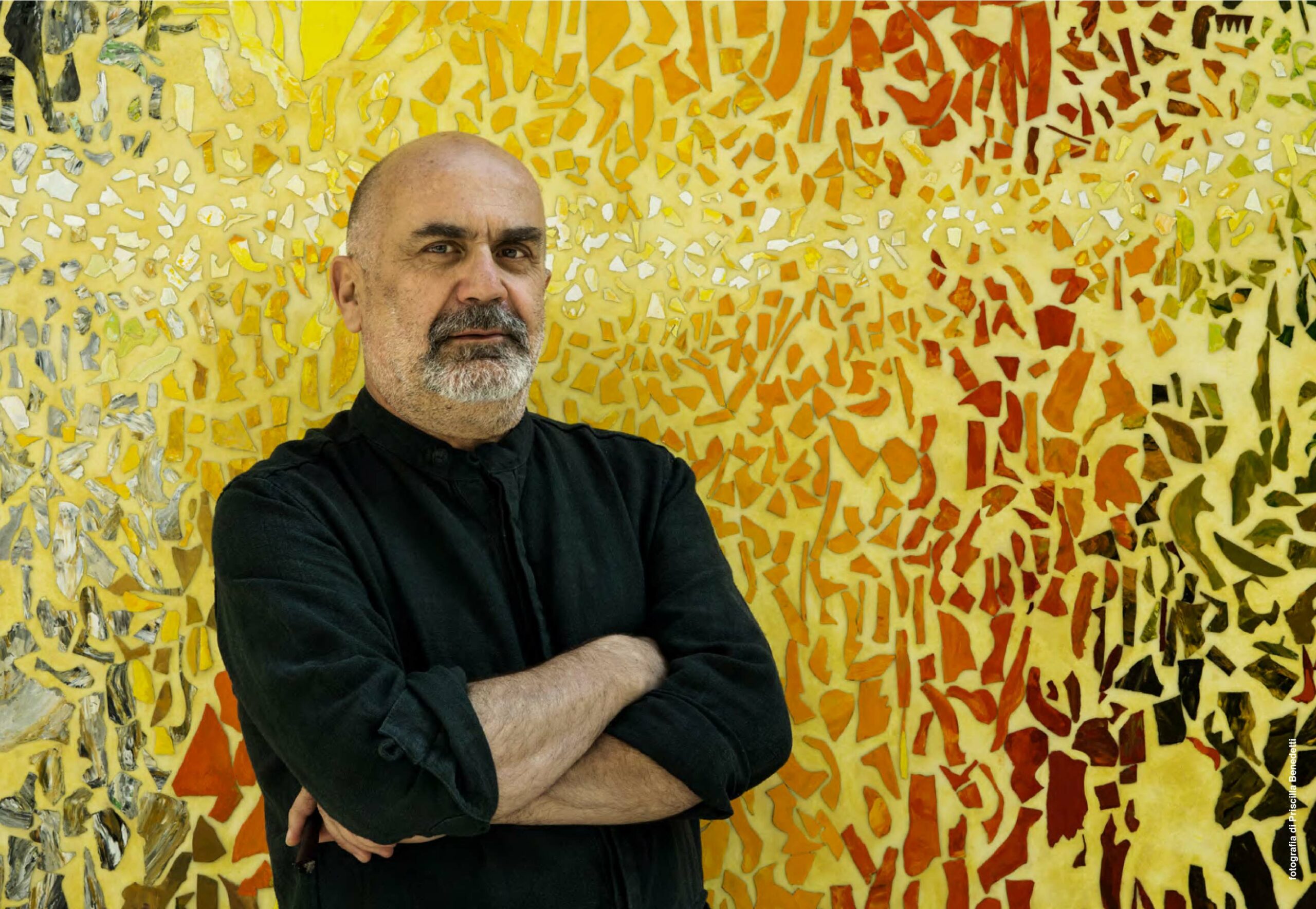