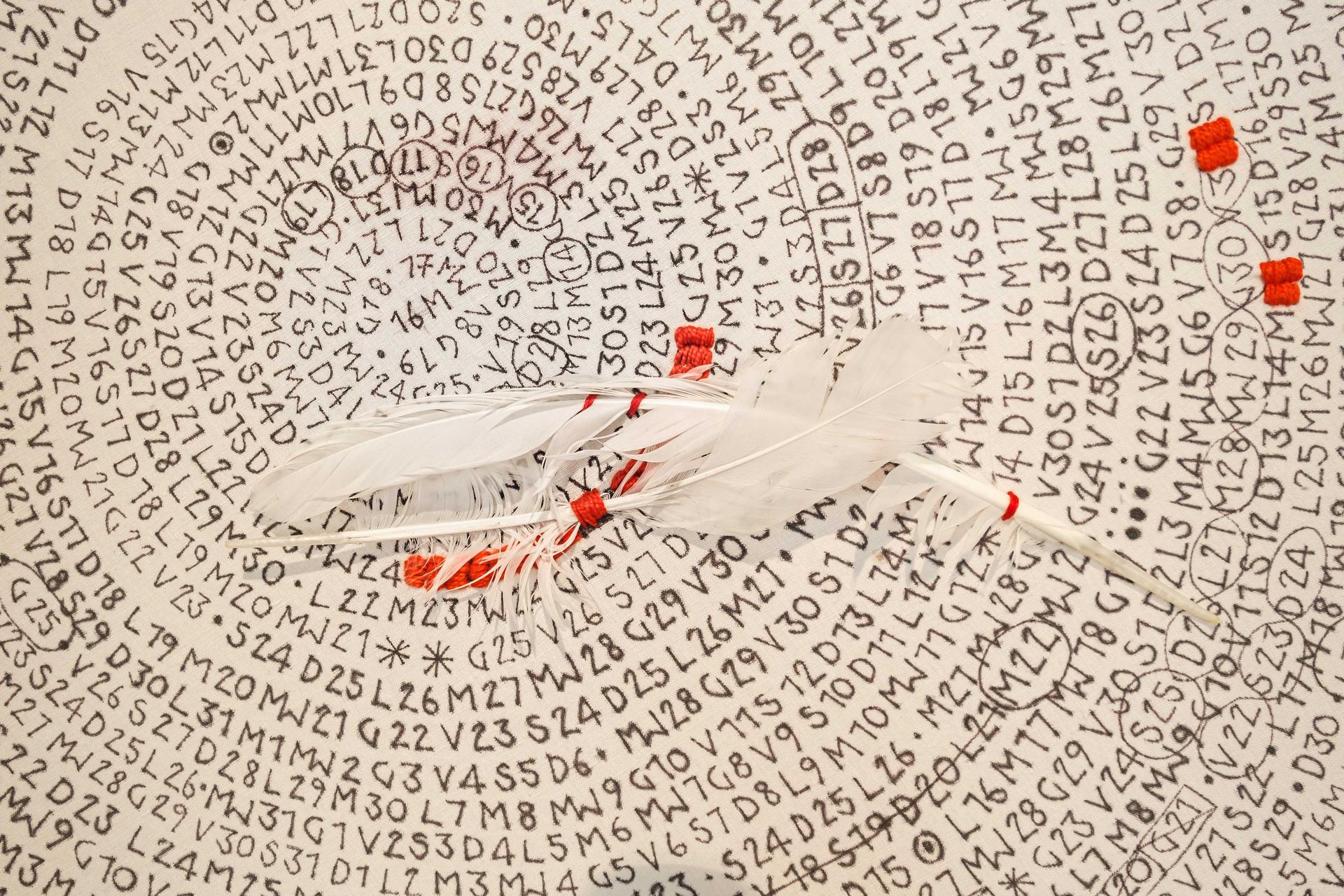 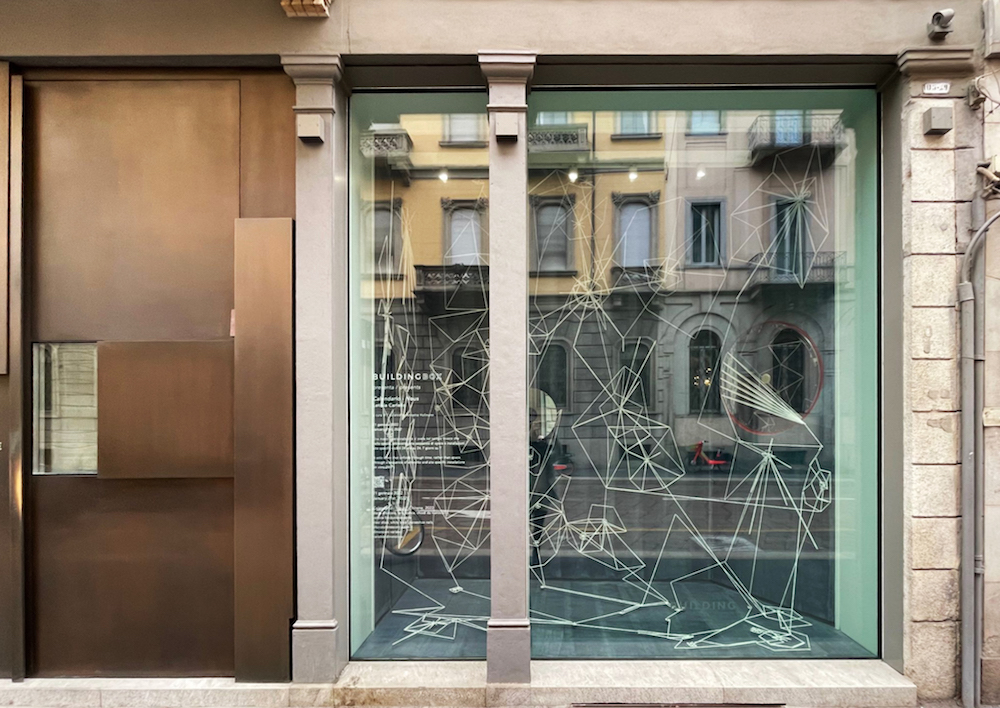 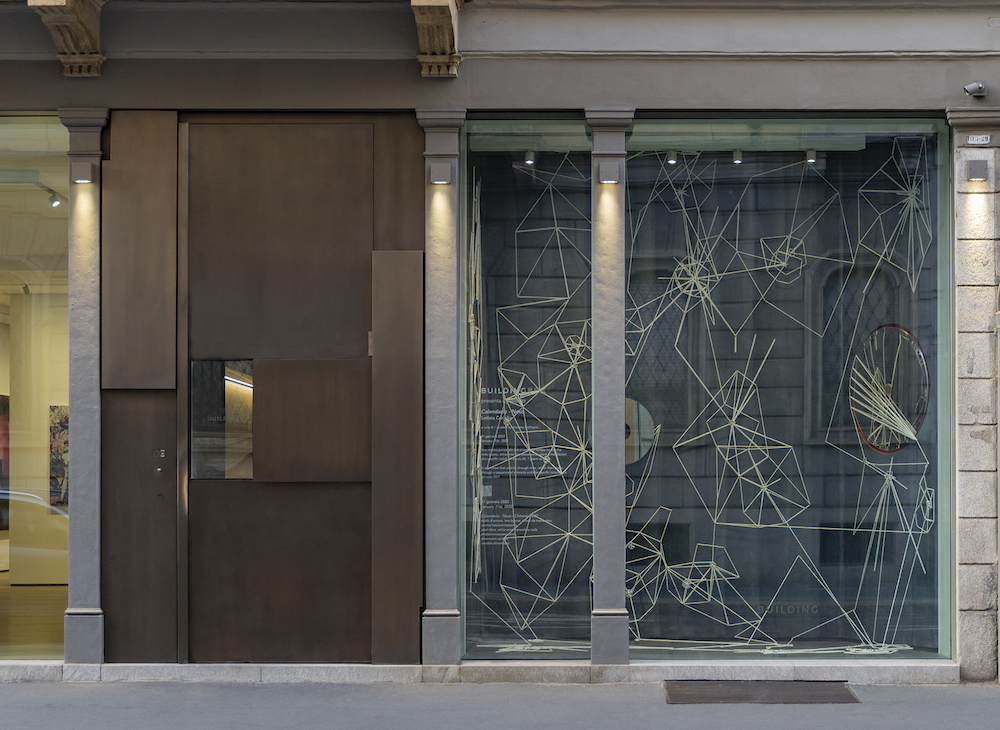 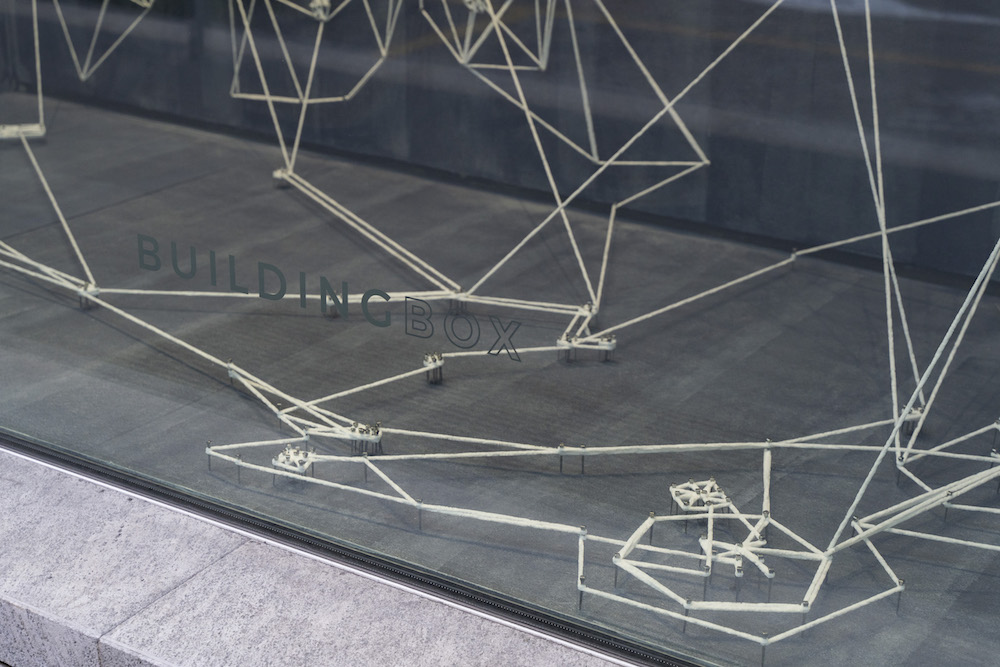 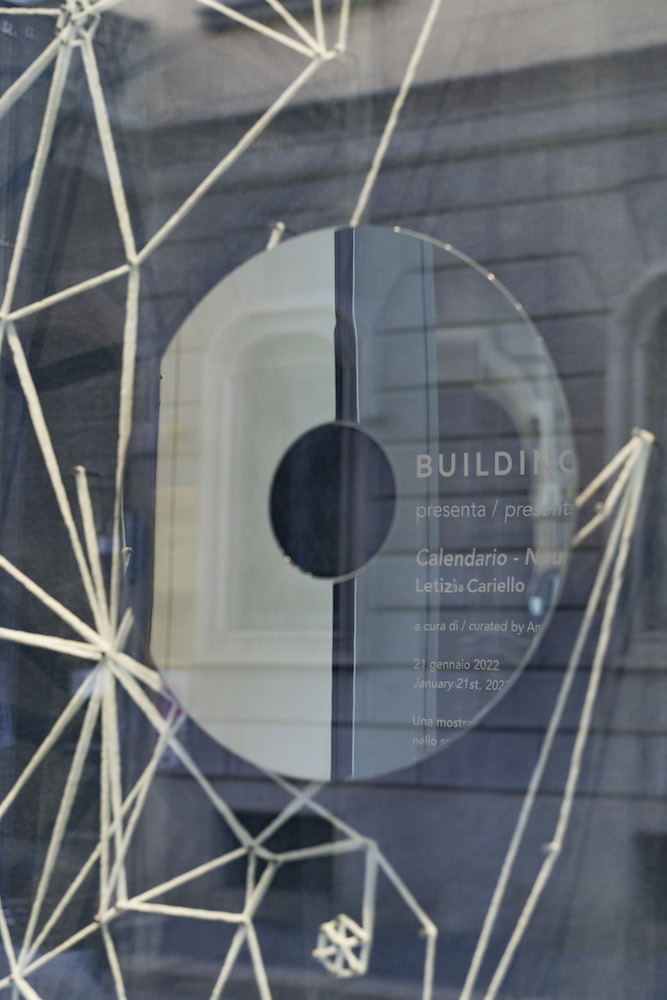 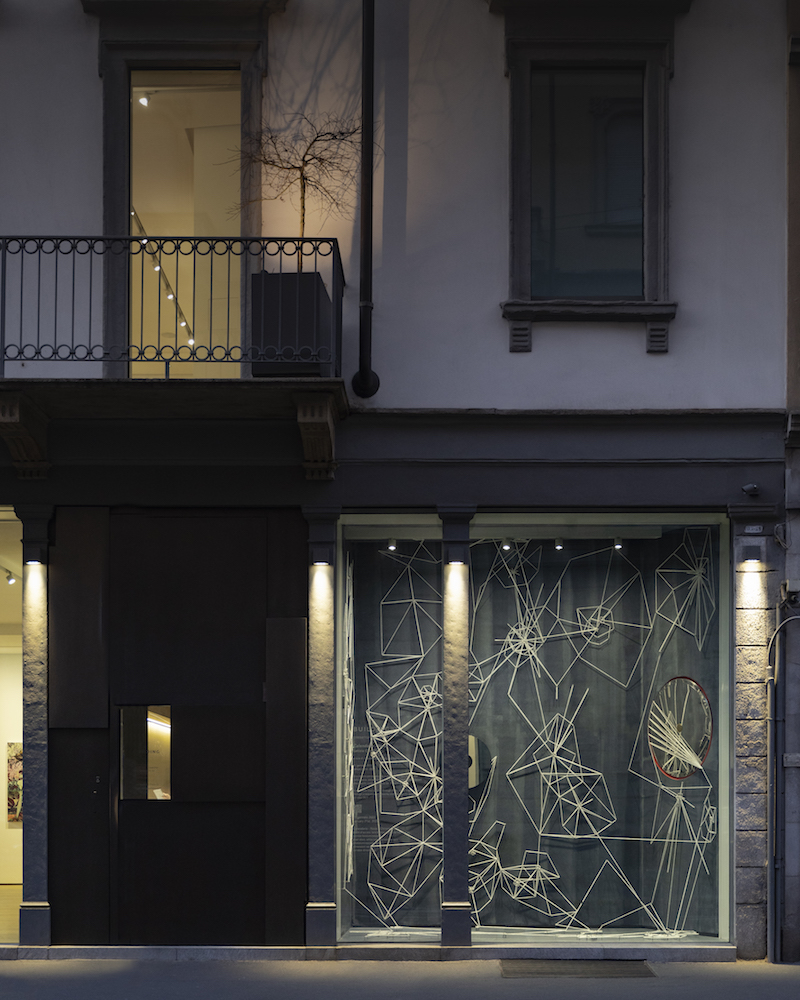 ink writing and embroidery on framed sheet with feathers

From January 21st, 2022, BUILDINGBOX presents the first site-specific installation in the solo exhibition program devoted to Letizia Cariello, curated by Annette Hofmann, which explores the concept of Nous. The installations can be viewed 24 hours a day, 7 days a week, in the gallery window at via Monte di Pietà 23 in Milan. This work shows two steel discs, white wool and blacksmith nails, installed in the box which is in blue and red shades, with luminescent paint.
The first site specific installation is Calendario – Nous / Chirone. Like all the forthcoming projects, may (or may not) be altered by the artist while it is on show, according to her creative timeframe. The concept of νοῦς, understood as threshold, is a door that marks the passage from interior to exterior in space and time, and in the physical venue of BUILDINGBOX it gains material form too. Offered to the viewer behind the glass, which acts as a diaphragm between the street and the gallery, the empty space of BUILDINGBOX turns into a genuine planetarium: the dark blue walls are painted with luminescent paint that becomes visible after dark, producing a lunar glow. On the surfaces, horseshoe nails and white wool yarn are arranged in a pattern inspired by the Chiron constellation, in an expressive modus operandi based on Letizia Cariello’s well-known Gates. Two discs of mirror-polished steel fixed to the walls evoke forms that are midway between planets and mechanical components of the first industrial revolution. Chiron, the benevolent centaur and forger of heroes, is a physician of the soul who heals others to heal himself, who, after being wounded, begged the gods to let him give up his immortality, to put an end to his suffering. He represents the loving care of the generous heart, endlessly giving.
Viewers are drawn into an alternative kind of space, where an exchange of energy takes place, flowing from the luminescent walls, running through the wool, and rotating and gravitating around the steel discs, which evoke wandering planets, emphasizing the cyclical nature of the work. In the silence of the night the installation shines with a light of its own, becoming a wanderer itself and attracting us to it, a gateway to a mysterious gravitational hub.

Following the previous programs investigating the themes of light (5779, curated by Nicola Trezzi, 2019) glass (From Sand, Artworks in Glass, curated by Jean Blanchaert, 2020) and gold (The Shape of Gold, curated by Melania Rossi, 2021) in contemporary art – with a series of installations featuring 12 artists in 12 months – BUILDINGBOX has reimagined its customary approach by inviting one artist to exhibit for the whole year, according to her own creative agenda, in the window of BUILDING on via Monte di Pietà 23 in Milan, on view 24 hours a day, 7 days a week.
BUILDINGBOX, an independent space devoted to experimentation, will thus be offering a special view of Letizia Cariello’s art and eliciting the engagement of the public: through the window it will possible to observe the exhibition unfolding in time rather than space: an ongoing succession of site specific installations which will follow the artist’s own entirely independent, unpredictable creative schedule.
The themes of time and boundaries are central in the work of Letizia Cariello, who has long worked with the practices of embroidery and weaving to give tangible shape to invisible connections, exploring the relationship between interior space and external world. Driven by a desire to intercept the material consistency of time, she seeks out and gathers its traces, translating them into visual form by writing of calendars and using red thread – one of her trademarks – to connect and piece together objects, matter and spaces. Her sewing unites different spheres, restoring lost bonds and healing wounds. From trees to teapots, cups to photographs, her thread crosses through objects and everyday spaces, creating a tangible manifestation of the passing of time.
In Letizia Cariello’s oeuvre, her Calendars represent a form of meditation on time and its effective existence, a performative exercise of writing and mental focus on the time to come, an attempt to lend tangible presence to its intangible nature, to give it a concrete form, or at least attempt to pursue it, bestowing it with a name and a date. With Calendario – Nous in BUILDINGBOX the artist explores the concept of Nous (νοῦςin ancient Greek) which has been used since Homer to indicate the mental faculty to comprehend events– the intellect – intended as a door or gateway to another dimension, which fall outside linear time and open up to a concept of time that is circular, spiritual. Nous thus presents itself as a doorway that invites viewers to metaphorically cross boundaries and comprehend the intertwining of the installations with space and time, becoming an integral part of the artworks and the connections they forge.
Calendario Nous thus becomes an invitation to viewers to return through the year, so as not to miss the space changing in living time. In the words of Letizia Cariello, “BUILDINGBOX becomes flesh, a beating heart which pumps both day and night, thinning its own spatial and material boundaries, creating a Door to a new dimension, a space of connection”. Like a living being, the exhibition project will grow and change through the year, adding elements and taking them away, following its own irregular, unpredictable life path. 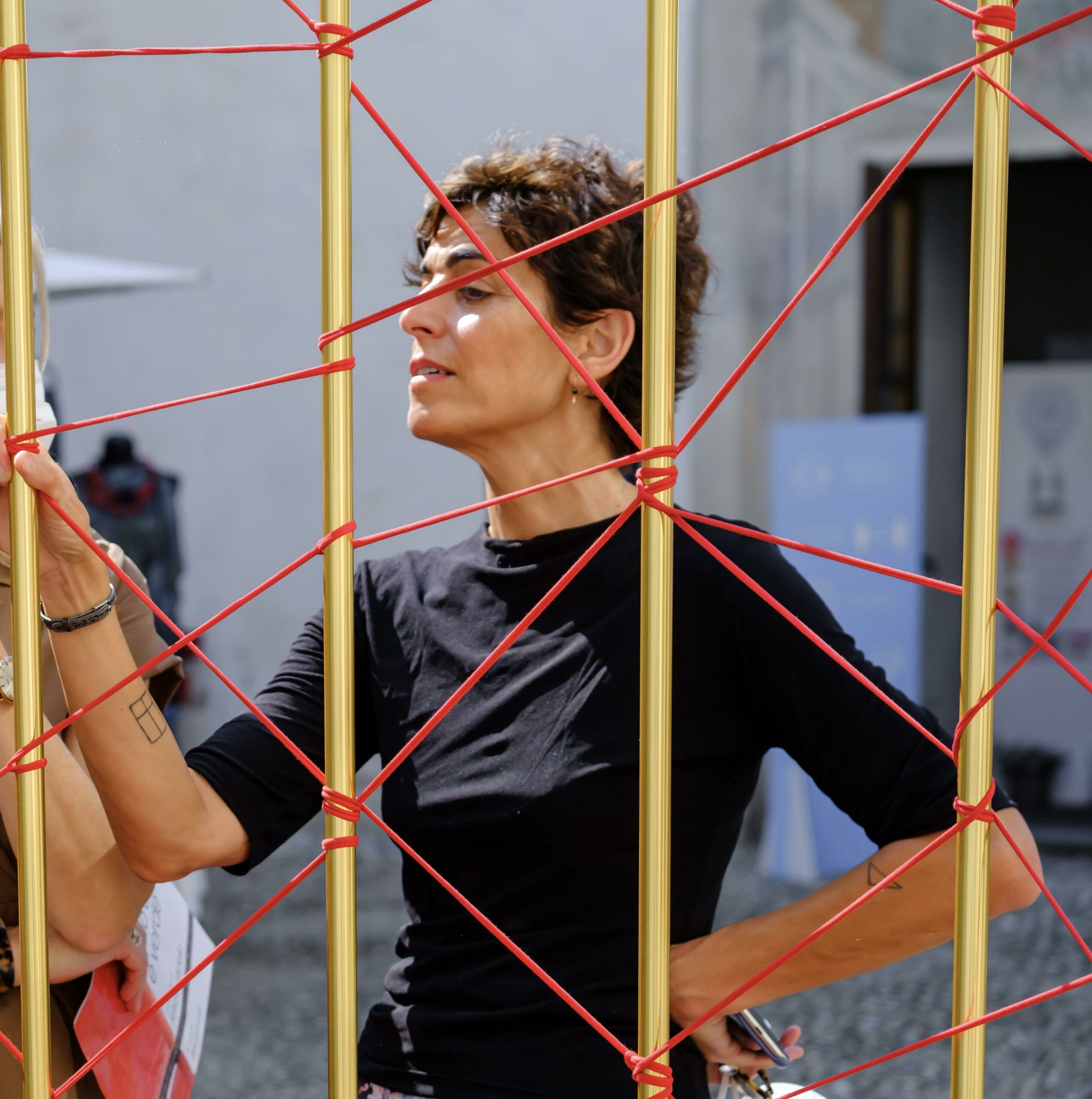 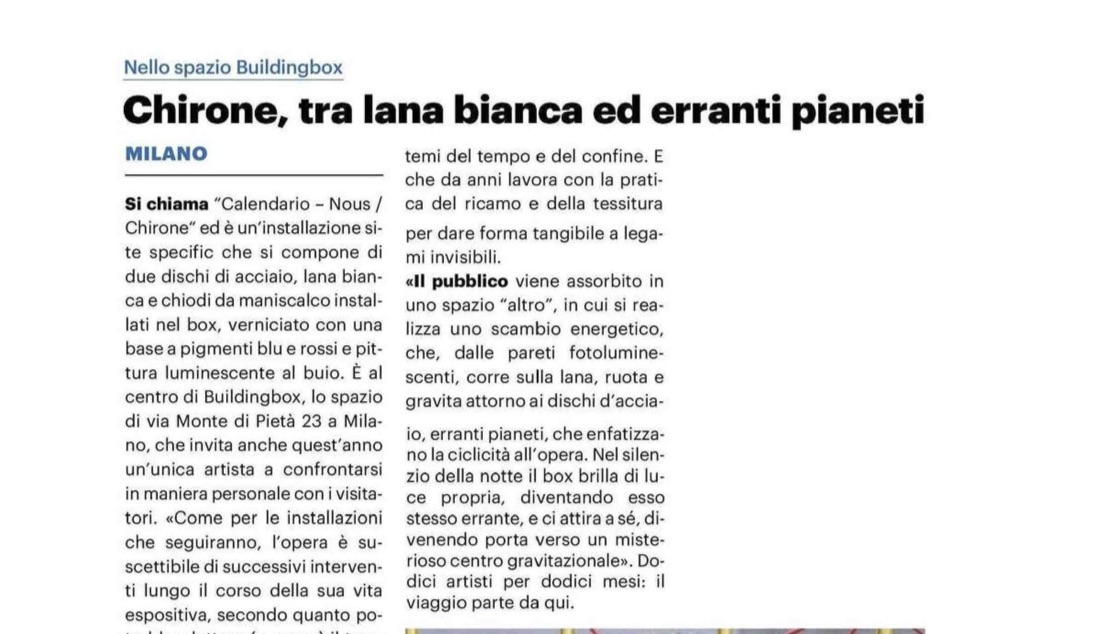 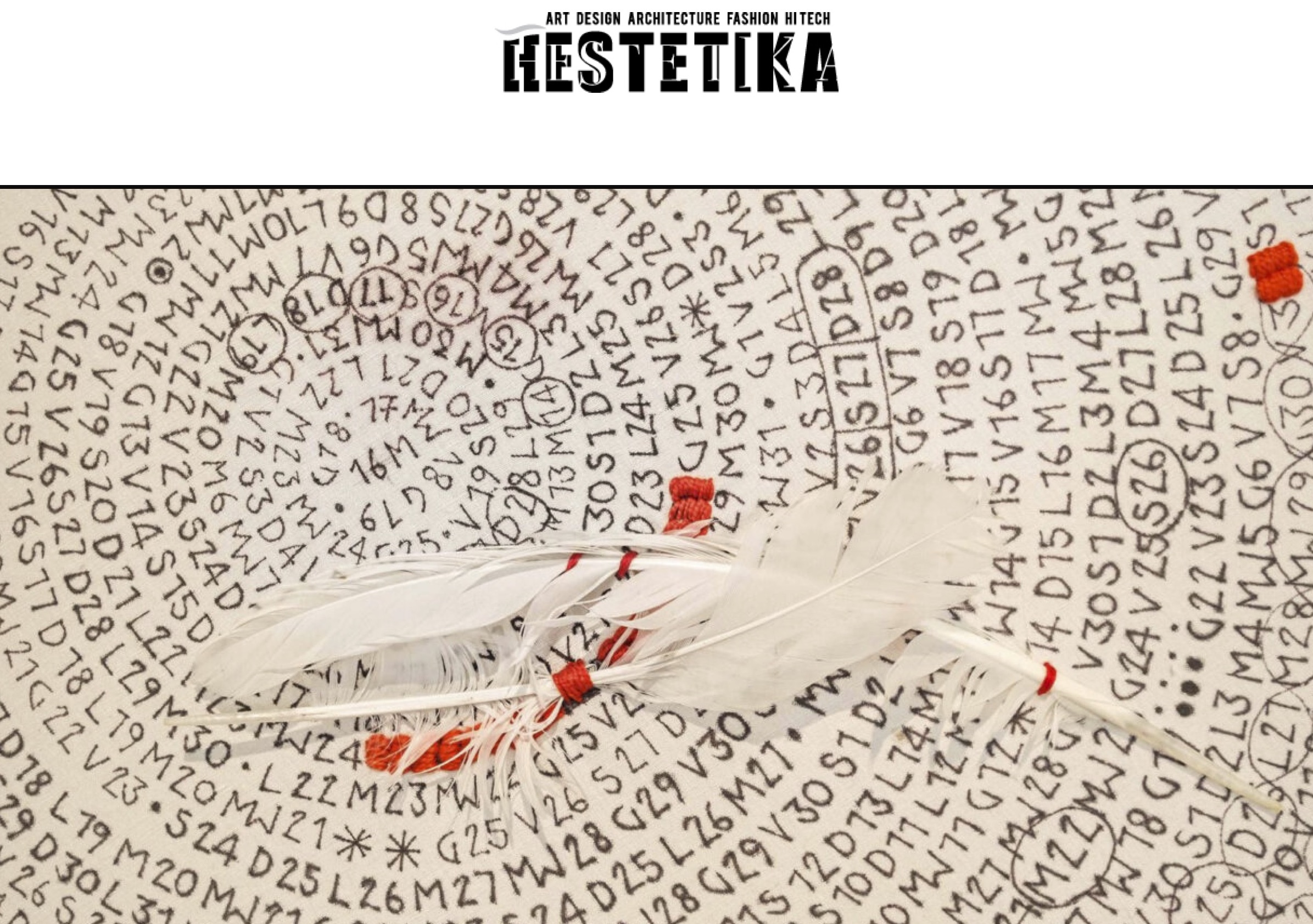 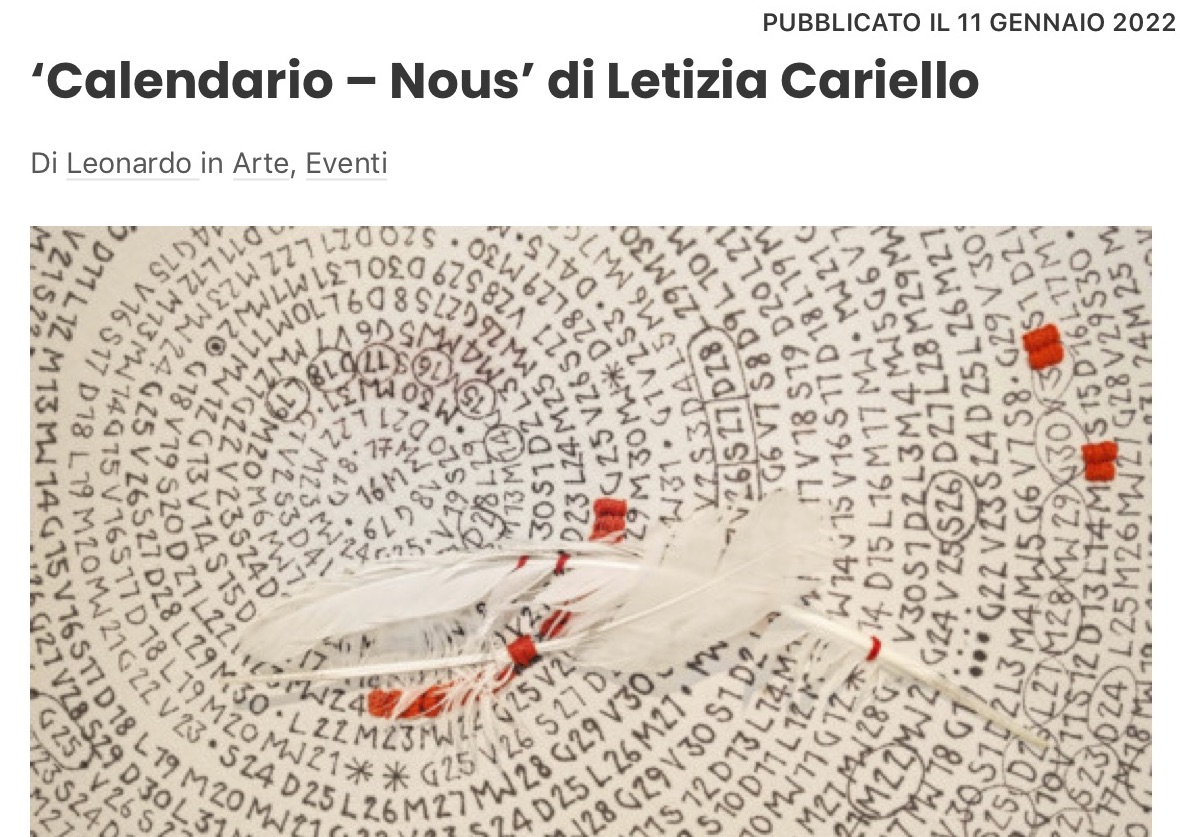 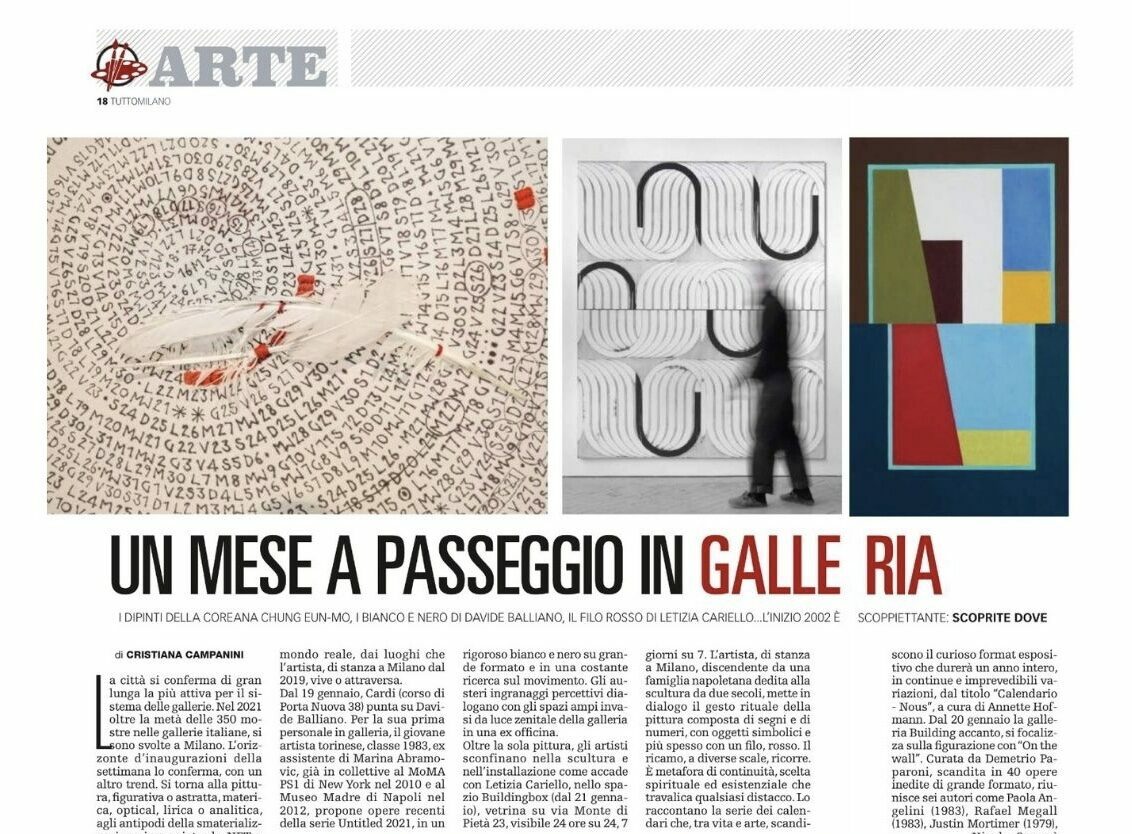