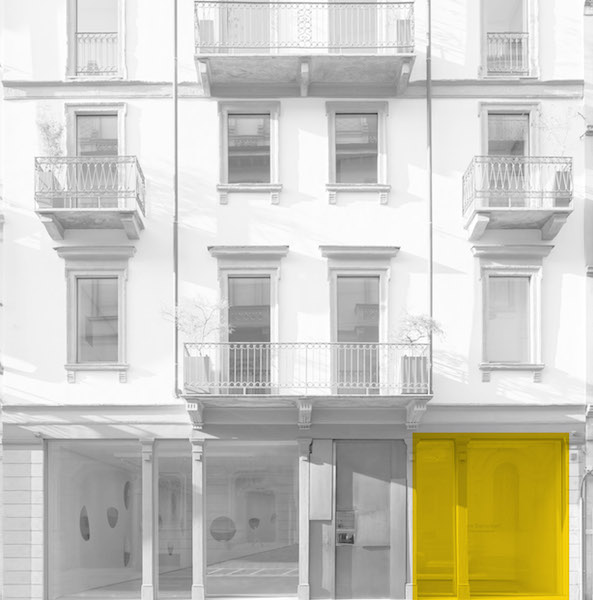 BUILDINGBOX is an exhibition project inaugurated in September 2018. BUILDINGBOX is located inside one of the windows of BUILDING that overlook Via Monte di Pietà. This setting ensures that it is visible 24 hours, night and day, without having to enter the building, although it is actually part of it. Through its location – included within the gallery but visible independently of it – BUILDINGBOX reflects the aim for which it has been created: to build an independent space characterized by a project which will be separated from the exhibitions program that BUILDING will host during the year. This project follows the logic with which BUILDING has been conceived, a logic based on different expository levels, both spatial and temporal. While BUILDING, with its four exhibition floors, is based on a spatial extension and can host an exhibition on several levels or different exhibitions at the same time, BUILDINGBOX is based on a temporal extension: it will host a series of works, linked to each other from a common thread developed in time, rather than in space. BUILDINGBOX is a further multiplication of time: a continuous, present, repeated time that widens and expands the exhibition possibilities and the variations that BUILDING is able to offer. BUILDINGBOX is not a simple showcase, it is a physical space, delimited by white walls and glass, an unreleased exhibition solution that represents an interruption of the ordinary concept of exhibiting, in which content and container are closely connected, giving life to a constant dialogue between form and content. A relationship that also occurs between the inside and the outside, since this is a place visible 24/7. This showcase will host different artists and designers, cycles of exhibitions and temporary projects, offering a curatorial analysis on multiple artistic themes. The inaugural project of BUILDINGBOX, 5779, curated by Nicola Trezzi and based on the lunar calendar, will analyze a logic of uprooting the exhibition making based on the predominance of time over space.